The overarching goal of my research program is to understand how interactions among individuals within and across species, influences the response of populations to environmental variation. Within this goal, my work covers a wide range of temporal scales, from plastic and behavioral changes within individuals to eco-evolutionary dynamics of whole communities. 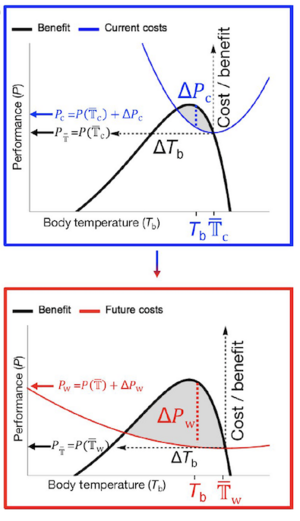 i) Ecological impacts of temperature variation

Temperature impacts numerous aspects of the life-history and ecology of organisms, including development, reproduction, mortality, the strength of species interactions, and many other measures of performance. Furthermore, temperature variation is a nearly ubiquitous feature of life on earth and despite a strong grounding from thermal biology and the metabolic theory of ecology, our capacity to predict the impact of temperature change is insufficient given current global challenges.

My interest in this area began at an early phase of my career. By integrating the observed Boltzmann-Arrhenius scaling of vital rates into a classical model of consumer-resource interactions, I generated predictions for how equilibrium and non-equilibrium communities would respond to temperature change (Vasseur and McCann 2005; Vasseur 2007a). These works emphasized the importance of direct and indirect effects of temperature (those transmitted via species interactions); however, they also highlighted that a great amount of uncertainty about the form of temperature-rate relationships would need to be overcome when applying this work to more specific contexts. In the years following this early work, many researchers contributed to the integration of unimodal and other complex temperature-rate relationships into community models (my own included; Fey and Vasseur 2016; Scranton and Vasseur 2016; Wieczynski and Vasseur 2016; Wieczynski et al. 2018). However, with little agreement about the functional forms of these relationships, particularly for carrying capacities in these models, there has been little consensus among their findings.

Recently, I synthesized this area of work (Vasseur 2020) and identified several constraints on the relationship between temperature and carrying capacity that had been overlooked in previous work (including my own). With this advance, we have been able to resume o ur study of the temperature-dependence of community dynamics including more nuanced unimodal temperature-rate relationships (Vinton and Vasseur, in prep.). We are now able to extend our framework to larger food webs and this will be an important direction of my work in the coming years.

As a branch of the work described above, I have been investigating the role of thermal variation in forecasts of long- and short-term population performance and persistence. Stemming from previous work that mainly considered changes in mean temperature, w

e demonstrated that temporal variation in temperature has a much greater impact on population performance than changes in mean temperature and that variation puts the greatest stress on species at sub-tropical latitudes (Vasseur et al. 2014). Although this work has been influential, the mathematical framework on which it is based incorporated many flawed assumptions that my more recent work has begun to address. One of these flawed assumptions is that species always experience the same variability as their ambient environment – whereas it is well known that behavioral thermoregulation plays a large role in allowing individuals to circumvent stressful conditions. In Fey et al. (2019) we contrasted our previous results with a framework that allowed individuals to incur both the benefits and costs of thermoregulation and identified the conditions and locations which are most likely to allow a ‘behavioral buffering or rescue’ of populations threatened by warming. Future work in this area will aim to integrate the forecasting approach developed in Fey et al. (2019) to include species interactions in the cost/benefit structure of thermoregulation.

ii) Acclimation as a missing ingredient in ecological forecasting

Temporal variation in environmental variables is well known to drive changes in vital rates and yet process-based models rarely improve forecasting horizons relative to simple statistical approaches. In part, this is likely due to plastic changes in morphology, physiology, and behavior that cause vital rates to stray from their predicted relationship (e.g. a reaction-norm) when environmental variation occurs on short-time scales. Using the model organism Chlamydomonas reinhardtii and other cosmopolitan algae, we have been investigating the importance of thermal acclimation – a particular form of reversible phenotypic plasticity – to improving forecasts of population growth and other ecological patterns. We have demonstrated that thermal acclimation can have a large impact when plasticity is gradual relative to the rate of environmental change (Kremer et al. 2018). Furthermore, we have demonstrated that gradual plasticity can lead to a non-intuitive reduction in population growth during acclimation, suggesting an important interplay between thermal acclimation and another hidden dimension. We are currently developing experiments to reveal the mechanistic basis for these findings.

In concert with the above, we have developed and tested a framework for including gradual plasticity in forecasts of population growth (Fey et al. in revision). This framework uses a dynamic model to explore a three-dimensional landscape (parameterized from detailed experiments) describing the response of population growth rate to the current temperature and phenotypic (acclimated) state. This model outperforms all alternative models and presents an important first step in extending the forecasting horizon. Given that population dynamics are intermediary to community processes, such as species interactions, invasion, and coexistence, acclimation (and phenotypic plasticity in general) has the potential to the foundation on which the current understanding of community ecology is built. Future work in this area will continue to examine the ecological impacts of thermal variation.

Mounting evidence that ecological and evolutionary changes can occur on concurrent timescales has provided a fresh set of ideas and tools for addressing classical problems in ecology. Over the past two decades, there has been a surge in experimental and theoretical work addressing how selection on individuals for certain traits can alter the adaptive landscape via feedbacks on ecology (including my work: Fox and Vasseur 2008; Vasseur and Fox 2011; Vasseur et al. 2011). However, much of this work failed to recognize that the individual variation on which selection acts can itself have important impacts on ecology.

After contributing to a major review paper in this area (Bolnick et al. 2011), I have focused my work in this area toward the impact of individual variation on the coexistence of competing species. Here, disagreement exists between empirical work citing the benefits of individual variation for coexistence, and theoretical work which has shown mixed support but incorporated a wide range of different assumptions (e.g. Holdridge and Vasseur, in review). To help resolve this disagreement we have developed a systematic framework for synthesizing the impact of intraspecific variation on coexistence and applied it to all previously published theoretical models (Simon and Vasseur, in review).  In general, we show that intraspecific variation tends to degrade the stabilizing mechanisms that support coexistence, and that positive-result bias has likely led to a focus on special cases rather than general results.